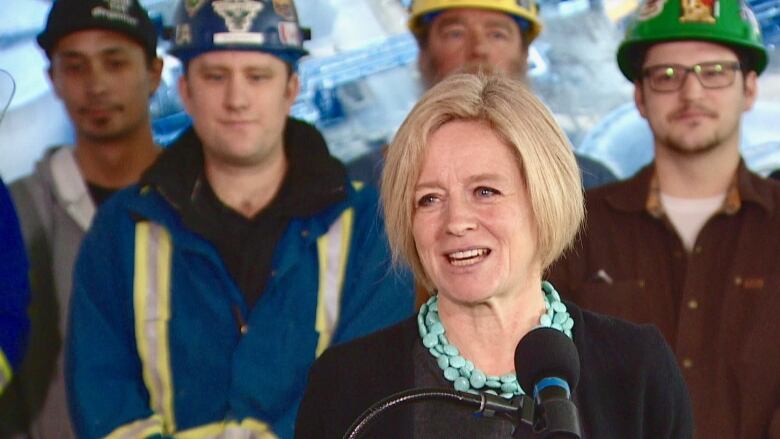 Considering the recent oil price crash in Western Canada and the fact a provincial election is expected in the spring, the Alberta government is trying to pull out all the stops to lift the oilpatch out of the doldrums​.

Buying railway oil tank cars, subsidizing petrochemical plants and mandating oil production cuts are some of the NDP’s moves to spur activity in the industry or to increase oil prices. Those moves have all received relatively strong support.

But the government’s latest announcement aimed at aiding the industry, to look at building a new refinery in Alberta, is being met with significant skepticism.

The Alberta government is issuing a request for expressions of interest from the private sector to build a refinery in the province that would use oil extracted here.

“It sounds, if I may be so blunt, like a little bit of desperation,” said Roger McKnight, chief petroleum analyst with En-Pro International.

“What is the market? Where is it going? How does it get out of the country?”

The only refinery to be built in Alberta in the past 30 years was the North West Sturgeon Upgrader, north of Edmonton, which was constructed with help from the Alberta government. The refinery’s price tag swelled from an estimate of $5.7 billion in 2013 to $9.5 billion. The facility has also faced criticism for only processing up to 50,000 barrels per day and only producing diesel, of which there is already ample supply in the province.

“It’s hard to be polite here. That’s an awful lot of money for very little return,” McKnight said. “I think it was a bit of a mistake.”

The Alberta government argues a new refinery would create jobs and create more wealth for the province by exporting a higher-value product. The Sturgeon refinery employed 8,000 people during construction and will employ around 400 full-time workers when it ramps up to full capacity.

The last refinery to be built in Alberta was the North West Sturgeon Upgrader, which was over-budget and delayed. It’s not yet operating at full capacity. (CBC)

Ian MacGregor, chairman of North West Refining, which is part-owner of the Sturgeon facility, says more refineries is exactly what Alberta needs.

“I believe that refining is the future,” he said. “What we have to start doing is we got to quit selling raw material. We’ve got to sell finished goods.”

Constructing a refinery would likely take between five and 10 years, according to experts. Alberta has four refineries with a total capacity of more than 475,000 barrels per daywo other facilities — Husky’s upgrader and asphalt plant in Lloydminster —also process about 110,000 barrels per day into diesel. The province has the largest refining capacity in the country, amounting to about 25 per cent of Canada’s total processing volume.

Calgary-based petroleum industry analyst Michael Ervin doesn’t expect there will be much interest from industry to build a new refinery in Alberta without a sizeable subsidy.

“I doubt that the private sector will really see a business case for this unless the Alberta government was willing to ante up close to the entire cost of building a refinery,” said Ervin, who estimates the cost of constructing a typical refinery at around $15 billion.

Considering the long-term trend of more electric vehicles on the road, Ervin said the business case for a new refinery “just doesn’t seem to be there.”

‘A wish and a dream’

“Whether that’s convincing the feds to buy Trans Mountain, or announcing the rail car purchase, or the curtailment of oil production — those are actually concrete things that have happened,” Bratt said. “[The refinery] is just a wish and a dream.”

The NDP has long favoured constructing more refineries in the province and did campaign on the issue during the last election.

Submissions from the private sector will be accepted until Feb. 8. Depending on interest, the government may issue a formal request for proposals.

Refineries are often built near high-demand centres and also where labour and construction costs are relatively low, such as in parts of the U.S. and overseas.

University of Alberta economist Andrew Leach said there aren’t many details about how committed the government is to seeing a refinery built, or how the proposals would be evaluated.

“So, first pass, certainly nervous about it and not enough detail yet to tell you exactly why,” Leach said of the announcement.

But if one of the big arguments for building the facility is jobs, that’s not enough, Leach said.

“If you were looking at investments you could make as a government in industries that are labour intensive, refining would be way at the bottom of that list,” Leach said.

Leach said there’s also the economic question of whether the financial return from refining is worth it.

“And the distinction there is, are we creating a product that’s more expensive enough to justify all of the labour and capital we’d have to put in to do it?

“And for the most part, in Alberta, the answer has been ‘no’ for a lot of the previous decades, which is why the commercial interest isn’t there.”

In response to strong industry encouragement, Alberta is taking action to explore interest from the private sector in building a new oil refinery in the province.

As part of a made-in-Alberta strategy to get more value for our energy resources, Premier Rachel Notley announced the government is issueing a Request for Expression of interest to determine business cases for investing in a new refinery in Alberta.

“For decades, Albertans have been talking about getting more value for our oil here at home. So let’s stop the talk, end the decades of dreaming and start making more of the products the world needs here at home. It’s time to grab the bull by the horns and to do more refining and upgrading that adds value and creates jobs here. The future is coming and it will be made in Alberta,”

Building a new refinery would create good-paying, long-term jobs for Albertans. New refining capacity would also help lower the oil price differential over the long term, protecting the province from a lack of capacity to export oil, and making sure we get full value for the energy resources owned by all Albertans.

“Large industrial value-add energy investments help provide economic resilience and diversification, and create highly skilled, well-paying jobs for decades. Alberta has abundant feedstock, skilled labour and the ability to refine our resources to high-value products the world needs. There is significant international competition for these projects and for Alberta to compete, government and industry must work together. We commend the government’s focus on ensuring the value of Alberta’s resources stays with Albertans.”

“Building Trades of Alberta has always believed you should refine it where you mine it. By doing that, you maximize the value of our resources for the people of Alberta, while creating good jobs for skilled trades workers in our province. We thank the government for exploring new options for refining and upgrading here in Alberta.”

“The work of the Energy Diversification Advisory Committee was focused on securing Alberta’s future in a more diversified oil and gas sector. It’s good to see another action that builds on Alberta’s strengths, including a highly skilled workforce and world-class resources. This is another sign the government is focused on made-in-Alberta solutions to ensure Alberta’s energy economy is built to last.”

Projects must have a strong return on investment for Albertans. Any proposed facility will consume Alberta-produced oil feedstock and produce marketable refined products.

The government will consider interest in new greenfield investments or an expansion of facilities at an existing brownfield site. Submissions will be accepted until Feb. 8, 2019, with the results helping inform next steps that may include issuing a Request for Proposals to construct a new refinery.

Companies will be required to submit their engineering design and technical feasibility, project timing and execution plan, plans for sales points and transportation to market, participation of Indigenous communities, expected environmental performance,financing to complete the project, and identification and estimates of revenues to benefit Albertans.

Expressions of Interest have been used in the past to obtain industry and public suggestions on major projects and how the government can utilize existing interest to maximize the value for Albertans.